Happy March everyone!  This is a very special month in terms of HJ team bloggers because we have two Emilys and they are both sharing a hack for the Bryce Cargo Pants!!  How fun!  Up today is Emily from Replicate Then Deviate, with her tutorial for mashing up the Bryces with the Sandbridge skirt to make a fantastic pair of jeans!  I cannot even get over how amazing these are.  Take it away, Emily! 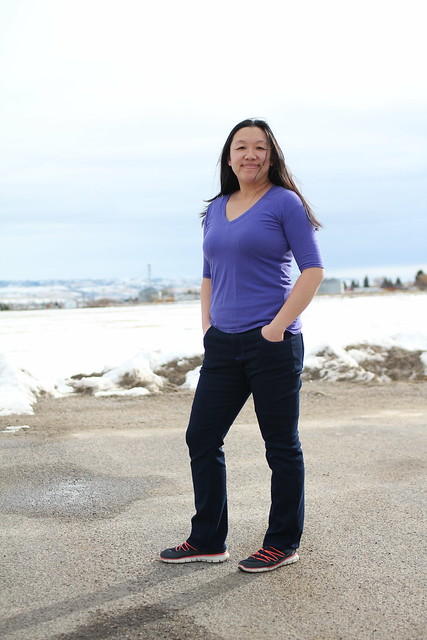 I am thrilled to be here today! And I am super excited to share my Brycebridge Jeans! They are a combo of the Sandbridge Skirt and the Bryce Cargos with a few modifications. I debated calling them the Natural Bridge Jeans but the alliteration of “Brycebridge” stuck in my head and I mentally started referring to them by that name so it stuck.

After sewing my grey sateen pair (a simpler version of the Bryce cargos without the cargo pockets and with the knee dart removed for fanciness) I couldn’t stop thinking about sewing a pair in dark stretch denim. I had leftover fabric (from Joann– but obviously a different color) from these jeans so I got to work!

Here are a few detail pics of my practice pair. They are completely wearable but I noticed I wanted a shorter yoke than the Sandbridge Skirt had. This is no fault of the patterns since the back yokes were drafted for a skirt. 😉 I also wanted more width through the lower leg so I added about 3/8 inch on each side. I tried rivets (from joann with the installation tool from hobby lobby) and didn’t love installing them. I think they look nice when finished but I would like to use nicer rivets on another pair. 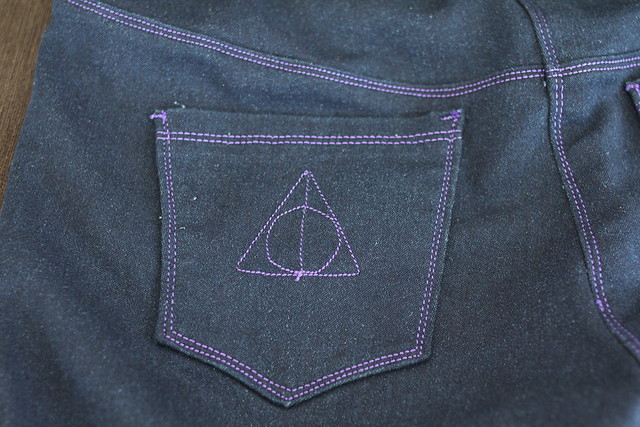 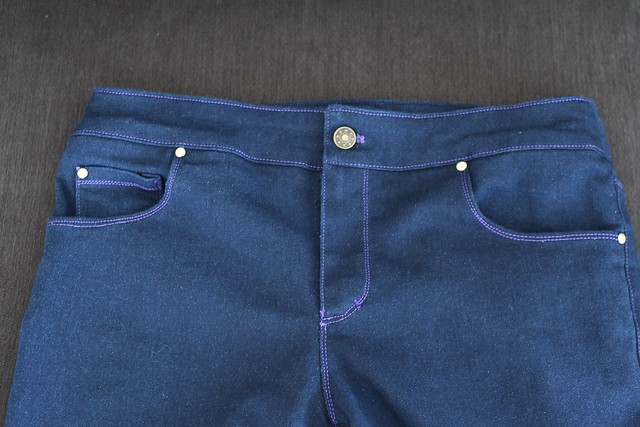 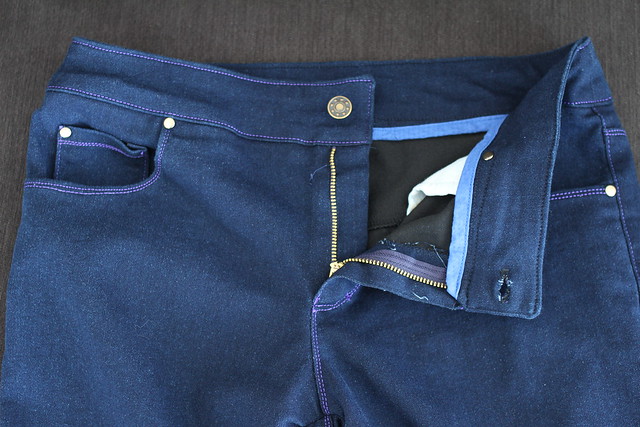 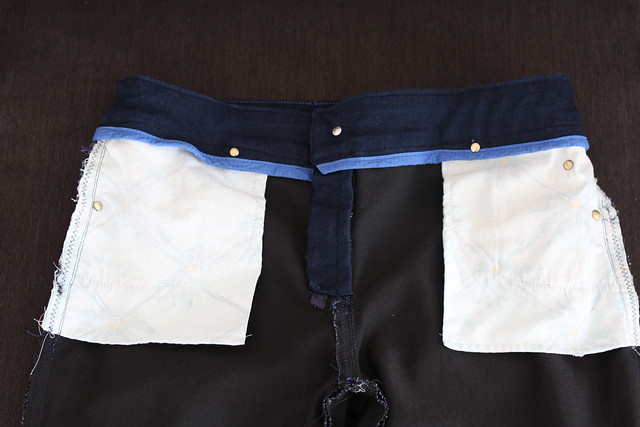 I taped the back darts together at the stitching line and placed the back yoke piece on top. You’ll see that I trimmed little bit off the edge of the back yoke, tapering to no trimming at the top of the yoke. (I cut to the right of the brown line). This is due partly to not reducing the hips of the Sandbridge Skirt pattern and my altered dart and pattern mashing… I think. 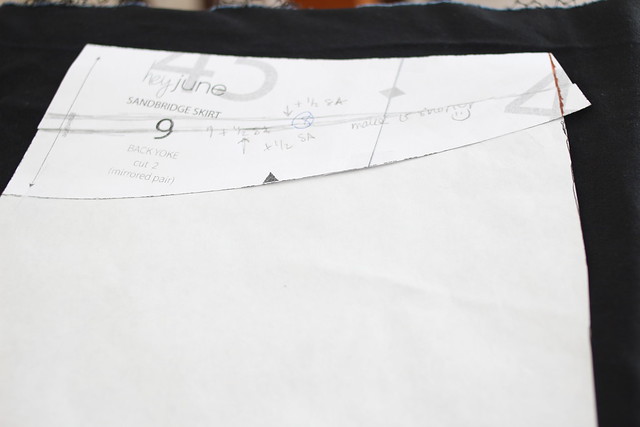 I drew a line where I wanted to shorten the yoke after looking at some rtw jeans. I cut along the sketched line and wrote a note to myself to add in the half inch seam allowance when I cut the pattern pieces. 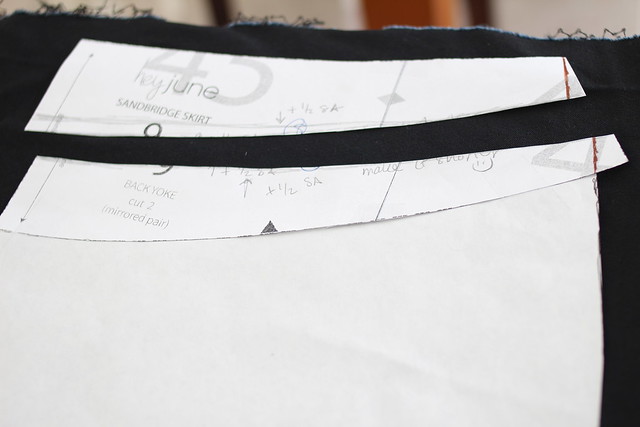 (back yokes with seam allowance) 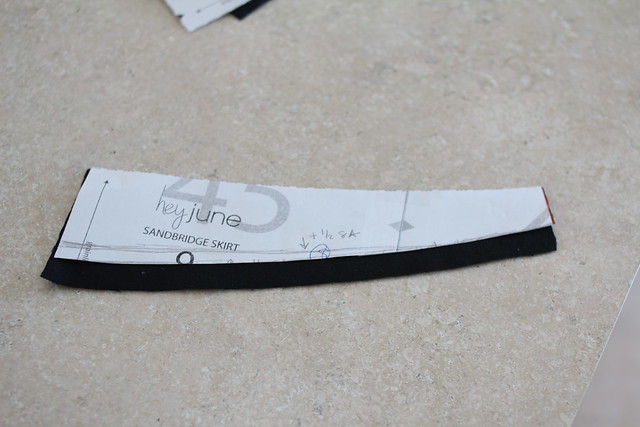 I added approximately 1/4 inch to the top and bottom of the waistbands and interfacing. 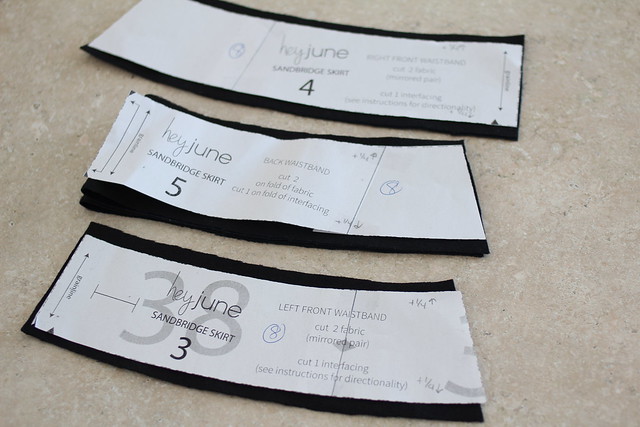 I chose to baste 1/4 inch elastic in the waistbands along the top edge after sewing the waistband to the waistband facing for a little stability. I noticed my practice pair was a little loose at the end of the day. I did use thin interfacing but the whole jean relaxes throughout the day. 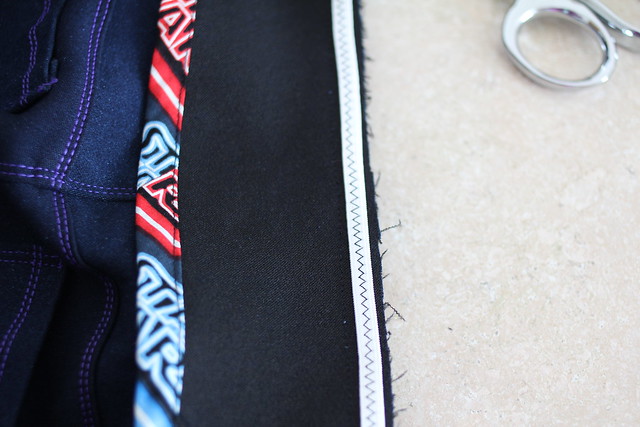 I didn’t trim the elastic at all when turning the waistband facing. I did trim the corners and rezigzagged the edge of the elastic so it wouldn’t shift. (I had cut off the backstitching when I trimmed the corners). (the bottom white line is wonder tape). 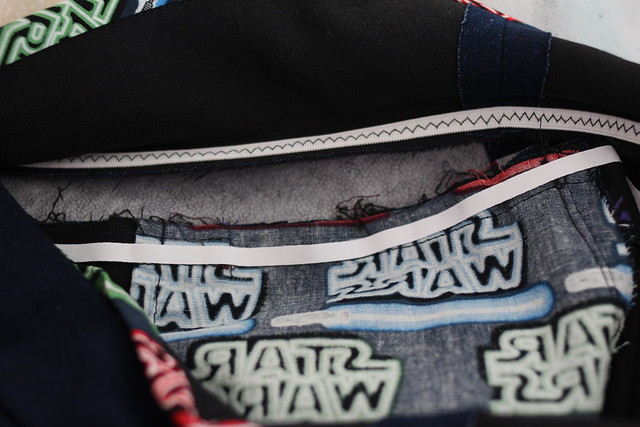 Also added about 1/2 inch to the fly shield of the Sandbridge Skirt to account for the different fly depth. (no pic)

These do still relax during the day and I didn’t take the weight of my phone into account. (hopefully my new phone will be less heavy- my real one fell in the bath a few weeks ago so I’m using mine from like five years ago).

You will also notice I didn’t add belt loops. I don’t wear belts and I’m a little fluffier in the middle. I suppose I could add some later and/or eat less junk.

ABOUT THIS SPECIFIC PAIR
I found I really needed to use my walking foot when sewing my stretch denim and woven cotton pockets. This was very helpful when sewing the pocket facings and even when sewing the side seams. I also found my machine preferred if my interfaced pieces were closest to the presser foot rather than down on the feed dogs.

I used a four inch zipper because I could not save the zipper stops on my practice pair and the zipper likes to slide down without the stops. I do think it could be moved in a little further from center because sometimes you can see it when I’m wearing it but again fluffy.

I AM SO HAPPY WITH THESE THOUGH!!!!! (also wearing an old union st tee. I’m sorry it’s not your color Adrianna). 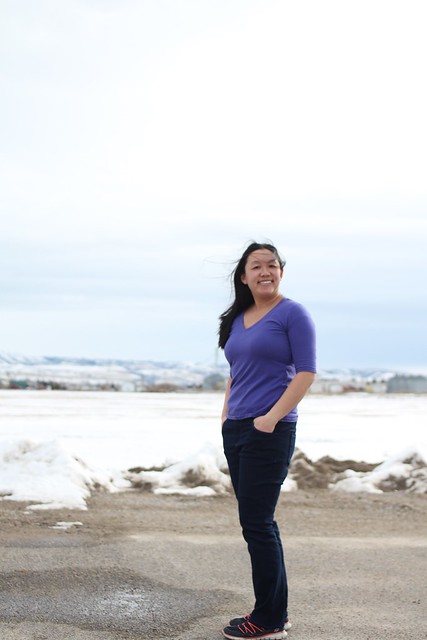 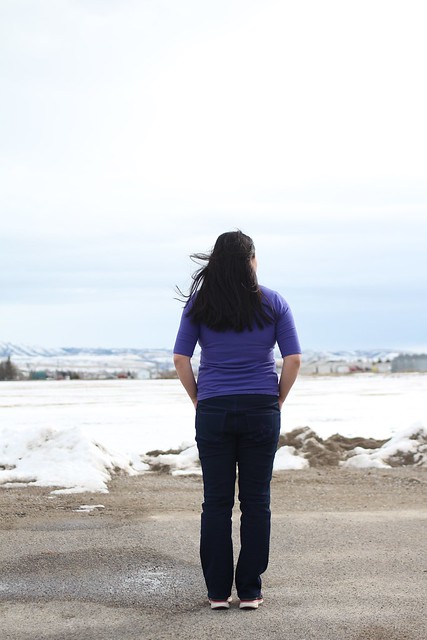 My three year old picked the sparkly button. Side note- the tack that came with it was the wrong size. It slid in but definitely didn’t hold. I used the tack from the other jean buttons. I’m hoping to order some that are better. 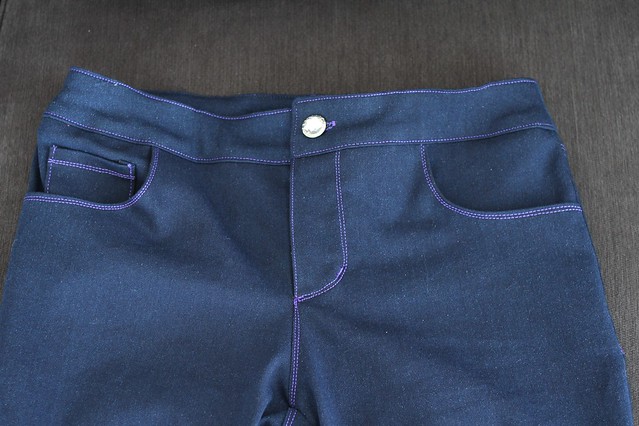 I started adding a dot of fabric glue where the waistband facing trim meets the edge to make sure it’s secure. I use a copious amount of wonder tape to keep my facing where I want it when topstitching and sometimes the wonder tape gives me the illusion that I fully caught the bias section. I briefly considered this “cheating” then decided I was just using my resources wisely. 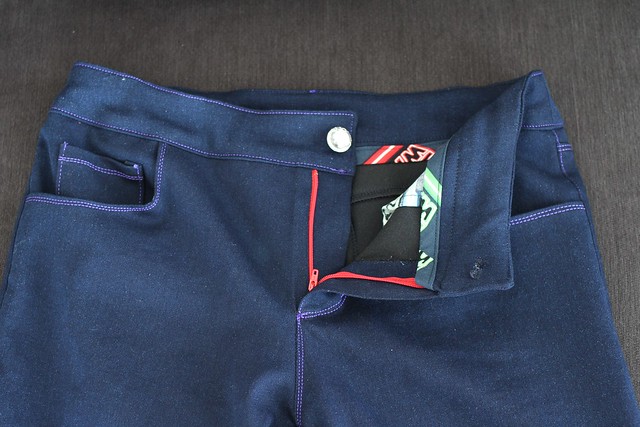 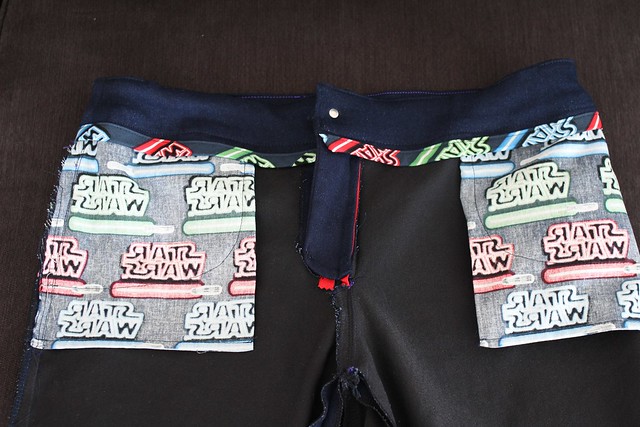 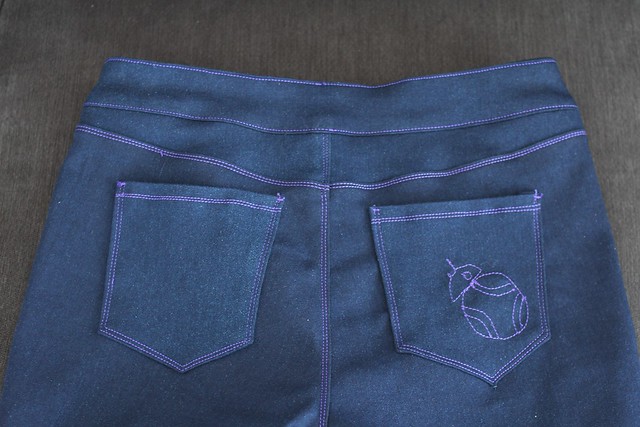 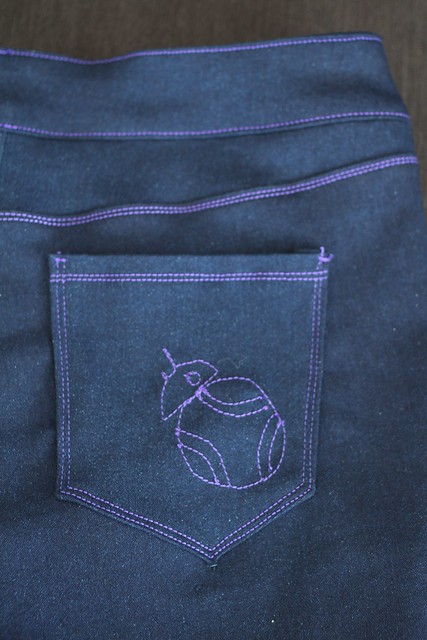 (aff link if you’re so inclined)

Thanks for having me! 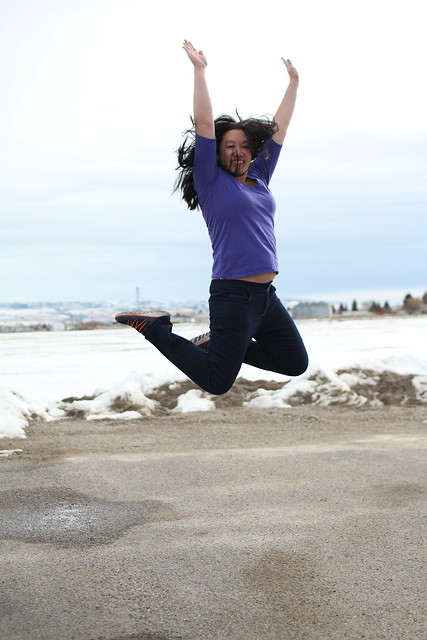 Wow, thank you SO much for that amazing tutorial, Emily!  I absolutely love these jeans, especially that rad back pocket stitching.  Personalizing is the best part of making our own clothes, don’t you think?  I hope you’ll tag me (@heyjunehandmade) and Emily (@replicatethendeviate) if you use her tutorial to make your own pair!